A nine-year-old angler in North Dakota recently reeled in what may be the largest goldeye ever caught on rod and reel. According to valleynewslive.com, Brayden Selzler landed the four-pound, 12-ounce goldeye from Lake Audubon last week, crushing the previous state record. Selzler said he has been fishing since he was old enough to hold a fishing rod, but he was not familiar with goldeyes. In fact, the boy said he was initially not impressed with catch and almost tossed it back in the water for a chance at bass. At the urging of his father, however, Selzler was persuaded to keep the goldeye.

“We hopped in the pickup and went to Garrison to have it weighed,” the young angler told the Associated Press.

Selzler was quickly informed that he had just broken the state record, and may have a chance at unseating the current world record. According to the International Game Fish Association’s records, the largest angler-caught goldeye was reeled in by Gary Heuer 27 years ago in South Dakota’s Lake Oahe. That fish weighed almost a pound less than Selzler’s catch at three pounds and 13 ounces. After hearing the news, Selzler said that he intended to submit the fish for certification. As for the goldeye itself, the Selzler family intends on having it mounted for display.

Heuer, now 72, told the Associated Press that he was glad another fisherman has the chance to eclipse his record and wishes the young angler the best of luck.

Goldeyes are not usually popular with anglers due to its small size, but may be tempting for fly fishermen looking for a new challenge. Anglers could consider themselves lucky to find a goldeye over a pound, and fish over two pounds are considered especially big. Despite not being very sought-after, goldeyes are considered very palatable, especially when smoked. 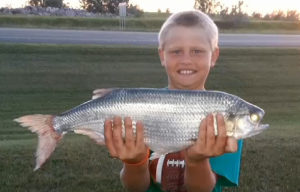 Brayden Selzler holds up a behemoth of a goldeye, which normally average under one pound in weight.