Forestville, Wisconsin: “Ladies, Let’s Go Fishing!” (LLGF) had a full class of nearly 60 people who came to learn fishing skills at the Gulf Coast University March 11-12 at Greater Pine Island Elks Lodge. The University offered education, hands-on fishing activities, networking and an optional fishing trip. While the participants were predominately female, some brought husbands and teens for the whole family to learn fishing. 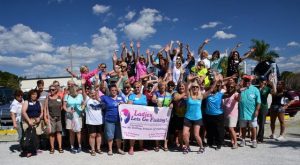 Women came for many reasons, some to learn so they could take their children fishing, others to learn how to fish on their own boats, some to network with other women interested in fishing. Those who fish in northern states wanted to learn inshore fishing techniques for Florida.

On Sunday, participants embarked on their chosen fishing adventures from boats where they caught or released snook, snapper, flounder, sea trout and other species.